Does my team need a mentor, a coach or a sponsor?

What does coaching mean at work? How’s it different from mentorship?

Mentorship, coaching and sponsorship are all ways to help your colleagues succeed, but they’re applicable in different situations and have different results.

Mentorship is most useful when teaching a skill. The mentor provides instructions and advice, and in following those, the mentee learns how to do a task. An apprentice is mentored.

A coach helps a sportsperson improve their game. It’s the same at work — coaching helps people do their job better. The key difference from mentoring is that the person being coached already possesses the skills needed to do the job. Through being coached, those skills are honed.

When someone is just learning to drive, the person teaching them acts like a mentor, giving instructions and advice. Through following that, the student learns the skill of driving.

Now imagine a coach for a race driver. This person knows how to drive already. How can you help them drive better? I used this analogy in my interview presentation at

Beamery, so here’s the slide:

Don’t give out instructions from outside the car — you can’t see the situation in the car. This is commanding or bossing.

Don’t give out corrective advice from the front seat. That’s mentoring, more useful for someone just learning to drive.

Observe and Reflect together

Sit behind and observe. At a pitstop, talk about what went well and how to take that to the next level. What situations could have been handled better and how. What to focus on trying next.

A Lesson from Sports

A football coach is not on the field, so they can’t tell the team or a player what to do in the heat of the game. A successful coach has to coach the players to think and figure out the best thing to do themselves. Not only this, they have to coach the team as a whole to think alike and act as one, which means given any situation, every player in the team needs to know what to do to help the team succeed without coming in the way of their teammates. They have to know how other players are going to respond, what they’ll need and what role to play themselves. Coordination and collaboration has to be organic and yet not chaotic.

Every player in the team is empowered to make decisions themselves and they are all aligned to act in unison.

All the coaching is done before and after the game, but the results show in the game.

We already established that mentorship helps someone acquire a new skill through instructions and advice, while coaching helps someone hone their skills through observation and reflection.

An easy way in which I explain the difference is as follows.

A mentee asks their mentor: How should I do this? What’s the right way?

A coach asks the person they’re coaching: What do you think? How should we do this?

At its most basic, in my opinion, coaching is all about asking open-ended questions to help people get answers to their problems themselves. It works better than advice because the solution comes from within and is their own. You already have all you need, your coach will only help you uncover and articulate it.

I could distil coaching down to 2 open-ended questions:

These are great situationally. But there are a lot of questions that can lead to coaching without having a situation to address — here are some examples.

I’ll defer to an article by Jill Wetzler that defines sponsorship much better than I can:

Simply put, a sponsor is someone who uses their position of power to advocate for the growth and advancement of a protégé.

And also quoted in the same article:

A sponsor is ‘an influential leader who openly and privately advocates for you, recommends you for highly visible or stretch assignments, supports you in risk-taking, helps you build relationships with key influencers, takes a vested interest in your career path and helps confront and interrupt bias.’

Sponsorship is needed to help people from underrepresented and marginalized groups reach their potential and become beacons of hope and change.

Lara Hogan’s How to Help Flowchart really simplifies all of this.

Go beyond mentoring your teammates — coach them, and sponsor them if they need it. Be aware of your privilege and use it, because we’re better together.

Want to work alongside some great humans and inspiring leaders to solve big problems? We’re hiring! Click here to join the #BeamTeam and change the future of work.

Who knew our Commercial team were so great behind the camera 🎥 (and of course Yogi, one of our resident doggos 🐶). Watch this video and see why our commercial team is great! 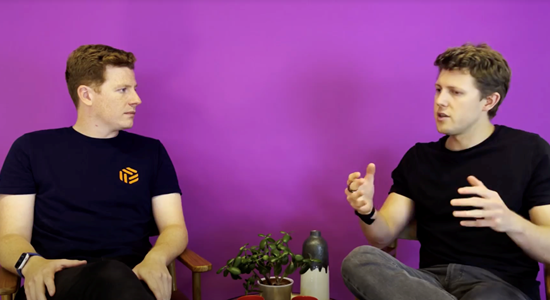 Coffee & Catch-up with our VP of Marketing, Ben Slater (Video)

This week we caught up with Ben Slater our VP of Marketing in our newest episode of Coffee & Catch Ups. Ben was the 6th employee hired here at Beamery and his team is a huge part of the growth that Beamery is experiencing!

Today, on International Women in Engineering Day, we are excited to share two of our Software Engineering heroes, Martha Lambert and Lyndsey Scott. They joined us through our Beamery Engineering Bootcamp in 2019. Our Bootcamp programme provides an…